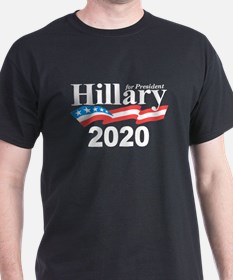 Will Hillary run again in 2020? Get ready, some say — because it is a distinct possibility.

“A Trump vs. Clinton redux in 2020 isn’t completely out of the question. After all, should Clinton have actually won Wednesday morning, she would have likely been looking to repeat a term after her first four years in the White House. Some would point to Clinton’s age as to a reason why the former Secretary of State wouldn’t run for another term — but, at 73 in 2020, she would still be one year younger than Trump, and the same age as Vice President Joe Biden, who many were touting for the presidency before he backed out of the 2016 race. (Not to mention two years younger than Bernie Sanders, who is six years older than his former opponent.)

“What’s more, even Trump supporters have said another face-off between the two candidates is possible. Just weeks ago, former U.S. Representative Newt Ginrich said he saw a repeat of the Trump vs. Clinton race in 2020 — even though he was assuming a Clinton victory. As he told POLITICO’s Open Mike, ‘I think it’s very possible.'”

Kate Ward is an experienced journalist — current Editor-in-Chief of Bustle.com, former Executive Editor of Hollywood.com,  editor and writer for ‘Entertainment Weekly’ and EW.com, and a member of Forbes’ 30 Under 30 in Media.

BE PREPARED FOR HILLARY 2020! Get the shocking (and highly entertaining) book The Occult Hillary Clinton, which is right now only $2.99 at Amazon!
https://www.amazon.com/Occult-Hillary-Clinton-…/…/B01MDO5GTD